My first 12x12 experience was at the 2nd event in 2010.  Never having shot film seriously and attending the 2010 12x12 Vancouver Photo Marathon gave me a new appreciation and in 12 hours, made me a better photographer than I had ever been before.  It was challenging on both the mind and the body.  Thinking over 12 hours, “How can I visualize THAT???” then walking to find or make that picture you envision in your mind.  At the end you feel both relief and a sense of satisfaction, but there will always be that nagging feeling that I could’ve taken a slightly better picture for this theme or that theme… that is unfinished business and I was back this year to ‘finish’ that business.

The 2011 event was a stark contrast to the 2010 12x12 event, this is not a bad thing, just different.  2010 was based out of Yaletown, giving photographers close access to industrial surroundings and the gritty Downtown Eastside.  2010 was also cold and wet… very wet, I recall when we were only 3-4 themes along and I was already taking the first picture that I came across and headed back to the warmth of 12x12 HQ.
2011 was based 2 blocks away from English Bay, much more residential, close to the water, touristy and sunny and hot.  Relative to cold and wet, hot and sunny certainly seems the more favorable of the two.  Well, depending on what equipment you were lugging around, it’s not all that much better!  A backpack for accessories and tripod can be uncomfortable slogging through rain, however, when your back gets sticky from the heat and lack of ventilation, that’s another comfort issue entirely.
I packed light myself, one Canon AE-1, one 50mm lens and one tripod (which I neglected in 2010).  In 2010 I used the same camera but left my tripod in my car, cursing myself every time I needed it and didn’t have it on me.  I also carried a laptop and digital body around, never making the effort to actually take it out too much. 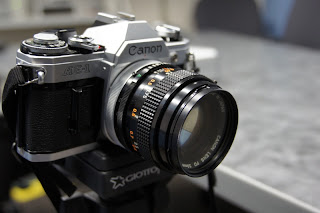 The one lens ‘strategy’ turned out to be the most important learning of the entire day.  It forced me to move around and really work to get that angle and composition that I pictured in my head.  Often times when shooting with a zoom lens, I will plant myself where I think the best angle is, zoom around a bit and snap.  The 50mm prime made me work and I chose to stick with that approach this year.
The late (10am vs 8am) start in 2011 was nice, not having to drag myself out at an early hour on a weekend was welcome.  My brother decided to tag along with me for the experience and to help me out where he could, it turned out to be one of the more beneficial ‘tools’ of the day, thanks Zeph!
Having someone to bounce ideas off of was invaluable and having a model easily at hand didn’t hurt either, as you’ll see in my pictures at the exhibition (Sept 25 @ Vancouver PhotoHaus) ;)
I will leave my photo inspirations and work to make the photos to another post, in general, everything rolled along fairly well.  Towards the end of the day the sun and heat were really taking their toll, necessitating water stops at every theme retrieval - thanks Urban Rush Café!
As the Celebration of Light fireworks finale was that night, the crowds grew thicker and thicker as the afternoon wore on, making movement up and down the main thoroughfare an exercise in agility and patience as I rushed from picture to picture and searching for ‘quiet spots’ to take my photos.  Things opened up a little bit by the 8pm theme as the West End roads were now closed.  I think it’s safe to say that most photographers were wishing for a “crowded”, “beach”, “sunset” or likewise theme to lighten the challenge of this marathon and yes, you were fully aware this was a “marathon” and not just any photography “contest” by this point (if not earlier).
Maybe it was the fatigue setting in, but the last few themes felt more and more challenging (I say “challenging” but the words floating in my head were “ridiculous” and “are you serious?!?”).  No photo popped into my head (not even literal interpretations) at each announcement, resulting in aimless wandering around the neighborhood, desperately hoping for inspiration.
That leads me to the general experience that 12x12 gives you.  Yes, your focus is on taking a photo for theme X.  What you are actually experiencing is visualizing the host neighborhood and Vancouver in general in a way that no other venue provides.  Seeing Vancouver for those detailed moments to capture.  The other experience is the comraderie of fellow photographers and the fun of bouncing ideas off of each other, helping each other and recounting the stories of ‘the photo that got away’.
My friend Irvine Chow, who participated with me in 2010, also joined again this year and his father was also able to join in off the waitlist.  Allowing father and son, who are both well into photography, to enjoy a day of it together.  That experience is something 12x12 provided the opportunity for which may not have been realized otherwise.
The 2010 experience for me was of self-growth and challenge.  I came out of it realizing what it took to take a great photo and a great new appreciation for film.
The 2011 experience was of determination and goal-reaching.  I suppose because I went in last year as a "roll of the dice" and no expectations, whereas this year was a more calculated effort, now with some expectation built up from last year's achievement.
Did I get there? I still feel I left something on the table, there's always room for improvement.  Hopefully I wasn't struck by disaster and total disappointment either......  The weather made for a different feel in photos, I don't feel I made a huge leap in self-discovery as I did in 2010.

The 12 hours are over, the photos all taken, weary feet rested, but the 2011 12x12 Vancouver Photo Marathon has not ended.  It has one more gift to give and very much a love/hate item... the ANTICIPATION of waiting for your photos and the results.  THAT is the one of the core values that the event is trying bring back from the film days and digital has spoiled us rotten.